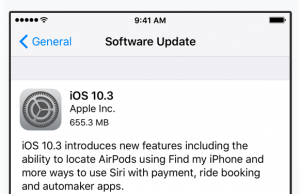 Yesterday apple released iOS 10.3 to iOS devices as a new release.  This release is a minor change to the user, but has a major change under the covers.  This is the first OS to switch over to Apple’s new file system called APFS.  Apple already used a proprietary file system called HFS+ for years, but the switch to APFS (based on ZFS) is a welcome change to speed and abilities from the file system.  What does this mean to the average user??? It just means the update will take around 30 minutes or more, so best to do it overnight or when you have time to wait.  It also means you should make sure you have a good backup in place before updating as always.

Notable Changes to the End User

To update over Wifi using the easiest option (Over the Air Update):